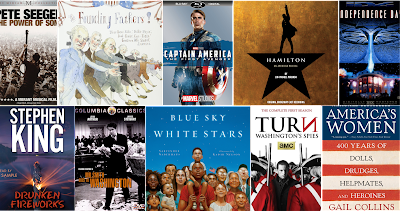 Happy (almost) 4th of July! Many of us enjoyed some early Independence Day celebrations last weekend, but the holiday isn’t over yet! In fact, with the 4th falling midweek, it seems like the perfect opportunity to stretch the festivities through another weekend. So if you’re in the mood for something patriotic this week—or something that just screams 4th of July celebrations—we have a few suggestions! 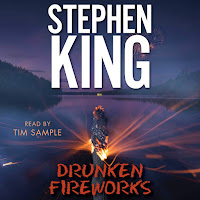 Alden and his mother are newly rich thanks to an insurance policy and a scratch-off lottery ticket, but their neighbors, the Massimo family, are RICH rich. What begins as a friendly fireworks competition between the two lake house neighbors (known in the county as “The 4th of July Arms Race”) ends in disaster. Skillfully read, this 2 disc story is a great 4th of July read!
Beth is the Assistant Branch Manager at Lebanon Junction Branch Library. In addition to managing staff and coordinating displays at Lebanon Junction, she is also a frequent Staff Picks contributor. 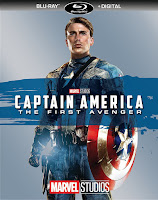 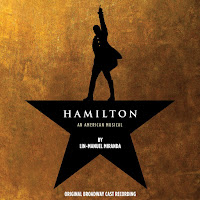 LISTEN TO Hamilton: Original Broadway Cast Recording
View in catalog
Listen with Hoopla
If music is more your thing, grab yourself a copy of Hamilton, or better yet download it from Hoopla so you can take it out with you while you watch fireworks. It took awhile to convince me that rap about one of our country’s founding fathers could be something I wouldn’t die of boredom listening too, but it is legit! After the first couple of songs, you literally can’t walk away! There is a reason this is a phenomenon. Amazing songs, talented singers, and a story you wonder how it can be based on reality. Don’t throw away your shot—yes the pun is intended—to jam to Hamilton this 4th of July.
Brandy T. is a Children’s Programming & Outreach Specialist. Beginning in August, her primary location will be Hillview Branch Library although she will also be organizing new monthly events like Wonder On and Homeschool Connect for multiple locations.
Gayle’s Pick

View in catalog
Of course we all know that the 4th of July comes once a year. In the midst of the noise that accompanies it, this film makes an even louder statement! While obviously tongue-in-cheek from beginning to end, it reminds us of the value of a united people and the sacrifices that many have made since the idea of a United States of America first began. Whoever the enemy, be it a country or beings from outer space, Independence Day will revive pride in being a ‘merican! A perfect movie for this time of year!
Gayle is a Teen and Adult Programming and Outreach Specialist. Although she plans programs for multiple BCPL locations, you’ll see her most often at our Lebanon Junction and Mt. Washington branches, where she offers monthly events like Brown Bag Book Club and Wii Bowling.
Heather’s Pick

READ/LISTEN TO America’s Women: 400 Years of Dolls, Drudges, Helpmates, and Heroines by Gail Collins
Get e-audiobook on Kentucky Libraries Unbound

A beautifully written and incredibly well-researched book that explores the funny and courageous women who built the history of our nation. I laughed and cried through the entire book, and when I finally closed it, I felt so proud to be a descendant of these incredible historical figures. This book is a must-read for every young woman searching for the bravery and independence of womanhood in America.

WATCH Pete Seeger: The Power of Song
View in catalog

I love this documentary because it reminds me of the impact that just one person can have for good, when you choose to speak your mind. Celebrate your freedom of speech this Independence Day!
Jennifer Nippert is BCPL’s Assistant Director. Among other tasks, she oversees staff development and works with the Library Director and Board of Trustees to develop and implement strategic planning initiatives.
Marianne’s Pick

READ/LISTEN TO What Unites Us: Reflections on Patriotism by Dan Rather and Elliot Kirschner
View in catalog
Get e-book or e-audiobook on Hoopla
Get e-book on Kentucky Libraries Unbound
No matter what you think about the current political climate, Mr. Rather’s observations of our nation’s history are bound to remind you that we are capable of more when we are united instead of divided.
Marianne is part of our reference team at Ridgway Memorial Library. Responsibilities include teaching one-on-one computer classes, providing reader advisory services, and helping patrons with research and technology questions. She’s also the Library’s go-to person for genealogy research!
Tracy’s Picks

WATCH Turn: Washington’s Spies
View in catalog
What better time to begin a series about Revolutionary War spies than the week of July 4th? Based on the true story of the Culper spy ring—and featuring “cameos” from the likes of George Washington and Benedict Arnold—Turn is an absolute treasure for American history buffs. And there’s plenty of danger and intrigue to keep the rest of us interested too! The series starts off just a little slow as we first get to know the characters and the various forces at play, but with its unlikely cabbage-farmer hero, complex situations, and life-and-death secrets, the storyline quickly becomes riveting. I love that the history isn’t dumbed down, that the Redcoats aren’t all automatically mustache-twirling villains, and that the characters’ choices are often conflicted. Plus, the acting and cinematography are superb. 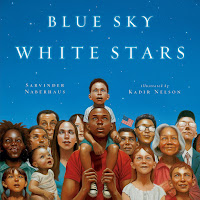 READ Blue Sky White Stars by Sarvinder Naberhaus
View in catalog
This is a great one to ooh and aah over with the kiddos! As usual, Kadir Nelson’s artwork is glorious and brimming with emotion. The illustrations work seamlessly with Naberhaus’s deceptively spare prose to paint a hopeful and diverse portrait of America, using the flag to represent iconic images of its people, landscapes, and ideals. Be sure not to skip the Author Notes in the back! 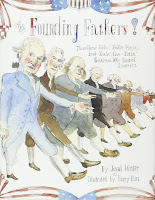 READ The Founding Fathers!: Those Horse-Ridin’, Fiddle-Playin’, Book Readin’, Gun-Totin’ Gentlemen Who Started America by Jonah Winter
View in catalog
This book for kids ages 5–8 is totally awesome for adults, too! If you’ve ever wanted to read a HILARIOUS, tell-it-like-it-is one-page snapshot of each of the founding fathers, this is the book for you. If that’s not something you ever cared to think about, trust me—give this a try anyway. And the kids will enjoy learning about this “bunch of guys with stomach issues and wooden legs and problematic personalities” too.

WATCH Mr. Smith Goes to Washington
View in catalog
This Jimmy Stewart classic about an idealistic young senator who refuses to back down against political corruption never fails to restore my faith in democracy.
Tracy Weikel is BCPL’s Public Relations Coordinator. Responsibilities include coordinating BCPL’s print and digital marketing tools—including signage, the library website, The Library Bulletin, and social media—as well as developing special initiatives such as Show Your Library Card and Save, Fine Forgiveness Month, and National Library Week celebrations.