As a reminder, library hours are: Monday–Thursday 11 AM–7 PM @Nichols, 9 AM–8 PM @All Other Locations | Friday & Saturday 9 AM–5 PM @All Locations | Sunday 1–5 PM @Ridgway Memorial Only
Skip to content
Home » UTB Spotlight: Highly Illogical Behavior by John Corey Whaley
Share this...

Traditionally here at BCPL, Teen Read Week has become the time when we announce the latest additions to our annual Ultimate Teen Booklist. This year, we are trying something a little different. Instead of providing you with a utilitarian list of all the new additions, we’ve decided to tell you a little more about each of our picks—including an explanation of WHY we believe it deserves a spot on our Ultimate Teen Booklist. Over the next several weeks, we’ll be highlighting new additions for our 2017 list one by one so that you can learn more about each of them. So while Teen Read Week may officially end after today, we’ll be keeping the celebration going!

The first new addition to our 2017 list is Highly Illogical Behavior by John Corey Whaley! 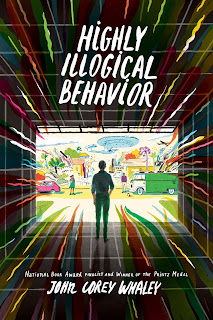 Whaley’s third novel was a Best of 2016 selection and has since appeared as a Staff Pick from yours truly, so it may come as no surprise that it’s joining the Ultimate Teen Booklist. I’ve read each of Whaley’s books, and every one of them has been named to the BCPL Best of the Year list: Where Things Come Back appeared on our 2011 Best of the Year list (our very first!); Noggin made the 2014 list; and, finally, Highly Illogical Behavior was selected last year.

Where Things Come Back also won Michael L. Printz and Morris awards, and Noggin was a National Book Award finalist. Yet of the three, Highly Illogical Behavior is the first to make the cut for our Ultimate Teen Booklist. All of Whaley’s books are extremely well written, with snappy dialog and intriguing characters, but Highly Illogical Behavior is the one that, for me, is the most memorable.

What it’s about:
Sixteen-year-old Solomon Reed hasn’t left his house in three years, and even the thought of doing so brings on crippling anxiety attacks. Solomon loves his family and Star Trek—and he’s fairly content with the status quo, even if his parents continue to hope he will someday want more. Enter seventeen-year-old Lisa Payton, a type-A overachiever with an essay to write about her “personal experience” with mental illness. Solomon’s breakdown three years ago was pretty public, so Lisa decides to “befriend” him and “fix” him to lock in the scholarship she’s chasing. She also pulls her boyfriend Clark in on the scheme.

Why it belongs on the list:
This is highly readable story about mental illness, friendship, and taking chances. It’s funny, bittersweet, though-provoking, smart, and sometimes eye-opening. Mental illness has become a popular topic of YA fiction in recent years, but Solomon’s anxiety is depicted so vividly that it feels like the realest, truest picture of anxiety I’ve encountered yet in fiction. Whaley has done a remarkable job of making the thoughts and fears of a teenage agoraphobe relatable.

The characters of Highly Illogical Behavior are complex and often defy stereotypes, from Solomon—who is so much more than the labels others might use to define him—to the sweet, unexpectedly layered Clark, who couldn’t be further from the standard one-dimensional “jock” character we’ve come to expect in fiction. Then there’s Lisa, whose self-serving scheme should make her an easy character to loath, and yet the reader can’t help but see her redeeming qualities or at least understand her—and not just because of some “noble sacrifice” manufactured by the author to make her redeemable. Thankfully, Whaley has also avoided the too-common YA trope of absent or vilified parents—Solomon’s are pretty great without being too ridiculously perfect either. While the book’s characters act in a way that is completely believable, they still keep you guessing. Just when you feel a situation is taking a turn toward the predictable, it goes somewhere so much better and infinitely more honest.

Witty dialog, prose that seems effortless, and oodles of quirky charm make this book a joy to read, and the book is further elevated by the thoughtful, multi-dimensional treatment of a character with anxiety disorder. It’s a book that makes you think about friendship, about forgiveness, and about personal courage—not the courage that wins medals and acclaim, but the small braveries that can be found in each and every day.
Source: Book News and Reviews