BCPL is jumping on the Great American Reads bandwagon!

Designed to spark a national conversation about reading, literacy, and the books that have inspired us, moved us, and shaped us, The Great American Read is an eight-part PBS series and nationwide competition that explores the joy of books and the power of reading through the prism of America’s 100 best-loved books, as voted on by the public. That’s a mission we can get behind!
To that end, we’ll be featuring a new series here on Book News & Reviews where staff talk about the books they’re reading from the list of America’s best-loved novels. To get us started this month, we’re discussing some of our all-time favorites! 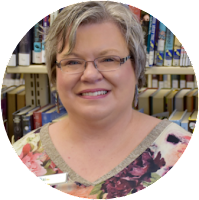 I know for sure that I’ve read 67 of the 100. To be honest, with some of them, I had to ask myself, “Did I actually read this or have I shelved it so many times that I just think I did?” Tom Clancy’s Hunt for Red October falls into the latter category. Also, if I only read the first book in the series, and not the entire series, I didn’t include it in my read list.

I was an English major in college, as well as spending 13 years as a bookseller before starting my library career. The experience of first encountering some of these books is seared into my memory; I can still smell the chlorinated water of the public pool where I devoured the Narnia series one summer while waiting for my younger brother to finish his swimming lessons.

However, I’d like to share a few that I’ve re-read over the years and found something valuable each time.

The Book Thief by Markus Zusak
The unique narrator, Death personified, was the hook for me on the first read. Later, I chose it for my first selection for a book club I was starting up. I was a little nervous about choosing it for adults to read, but years later, the club was going strong, and we still talked about it! Although the setting is terrifying, the book’s message about the power of literacy makes it an exceptionally inspiring read.

Get from the library

Gilead by Marilynne Robinson
The exquisite writing in this imagined letter from an ailing 77-year-old preacher to his young son always gives me something new to ponder. In my opinion, it’s an American classic.

Get from the library

The Little Prince by Antoine de Saint-Exupéry
We translated this from the French into English in my high school French class. I loved the illustrations; I will never forget the elephant inside the boa constrictor. I often re-read it to remind myself about the importance of seeing reality with fresh eyes.
Get from the library

Join The Great American Read with BCPL! Learn how you can participate at bcplib.org/GreatAmericanRead.