As a reminder, library hours are: Monday–Thursday 11 AM–7 PM @Nichols, 9 AM–8 PM @All Other Locations | Friday & Saturday 9 AM–5 PM @All Locations | Sunday 1–5 PM @Ridgway Memorial Only
Skip to content
Home » BCPL’s Ultimate Teen Booklist
Share this...

Let the Teen Read Week celebrations commence! Teen Read Week 2016 officially began this past Sunday and continues through Saturday, October 15th. As has become our tradition here at BCPL, our celebration features the latest updates to our Ultimate Teen Booklist. After making a ton of new additions last year, this year, we’ve made a point of cleaning house and removing titles that we no longer feel merit inclusion. This may be because we feel the book has become dated; because we think there there is a newer, very similar book that is even better; or because we’ve just lost our enthusiasm for a particular title.

That’s not to say we don’t have a few new titles we are excited to add! We’ve evaluated over 40 books for possible inclusion this season, and that’s not even counting the books we read before our committee season began. But to keep the list from getting too out of control, we’ve made extra efforts to be super selective this year while keeping our eye out for awesome books we’ve overlooked in the past as well as recent favorites we believe have the power to endure. We’ve also worked to round out our current list with a few more nonfiction titles.

So without further ado, here are the latest additions to our Ultimate Teen Booklist:

The Boy Who Harnessed the Wind by William Kamkawamba (2009)
This is the highly readable story of a young Malawian teenager who, unable to afford the tuition to attend school, taught himself the principles of physics and electricity from books borrowed from the local elementary school—and then used that knowledge to build a windmill that provided his family with light, heat, and running water. Yet this book is about much more than building a windmill. It contains elements of magic as Kamkwamba relates the folklore and superstitions of his culture, and it touches on many of the troubles in modern Africa without becoming overwhelming or preachy. It’s about inspiring a community and making a difference. Kamkwamba’s story is one of ingenuity, perseverance, and hope, and the easy, conversational style of this book makes the life in a poor African farm family seem both relatable and fascinating. A young reader edition is also available, but most teens should be comfortable with the original version. Middle School/High School.

The Hired Girl by Laura Amy Schlitz (2015)
Joan Skraggs is tired of being undervalued by her father and brothers for the backbreaking work she puts in day after day. Life is hard on a 1911 Pennsylvania farm, and 14-year-old Joan’s only respite is found in the books she loves. Then Joan decides she’s finally had enough of being unappreciated, unpaid labor and decides to get a post in the city as a hired girl. Under a fake name and lying about her age, Joan lucks into a position in the home of a wealthy Jewish family. Everything in her new world is foreign and utterly fascinating, and Joan soon finds herself making mistake after mistake—from setting her hair on fire to crushing on one of her employers’ sons—even as she grows from a naïve country girl to a capable young woman. Told through a series of diary entries, this is a warm and thought-provoking story, laced with humor. Joan’s voice is fresh and hilariously candid, sure to appeal to readers who’ve enjoyed characters like Anne Shirley, Jo March, or Jane Eyre. Middle School (mature)/High School. 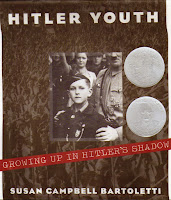 Hitler Youth: Growing Up in Hitler’s Shadow by Susan Campbell Bartoletti (2005)
Rather than focusing on Hitler himself, this well-rounded history considers the children and teens who pledged their loyalty to Hitler and their motivations for doing so. While some of the youths became disillusioned by Hitler’s ideals as they grew older, others remained steadfastly obedient to their Führer, often despite familial disapproval or their own consciences. Through the stories of twelve Hitler Youth members, Bartoletti  provides a terrifying picture of how Hitler was able to gain such unchecked power and blind devotion while offering a fascinating look at the young people who grew up during his reign. Middle School/High School.

Living Dead Girl by Elizabeth Scott (2005)
After enduring five years of terror and abuse, Alice believes her only escape from her captor is death. And now that she is fifteen, Alice half hopes that Ray will finally take that final step and kill her. But Ray has another idea: he wants Alice to help him select and train his next victim. With spare, lyrical prose, Scott weaves an intensely disturbing tale that promises no safe or easy answers. High School (mature).

Positive: A Memoir by Paige Rawls with Ali Benjamin (2014)
Paige was in sixth grade when she learned that she had HIV. Although she was born HIV positive, it didn’t really affect her life in ways she was aware of until she told a friend about her diagnosis and rumors began to spread. From that point, Paige became the target of relentless bullying. This is the inspiring and revelatory story of how she coped with the bullying and the challenges of living with HIV into adulthood. Middle School /High School.

Raven Cycle (series) by Maggie Stiefvater (2012–2016)
Blue is an outsider. She comes from a family of clairvoyants but has no psychic abilities herself; instead, her presence acts as an amplifier for others’ gifts. Like most of the Henrietta locals, Blue wants nothing to do with the stuck-up Raven Boys of Aglionby Academy, but then she meets Gansey, whose fate seems tied to Blue and a deadly curse. Despite her better judgment and fear of the curse, Blue joins Gansey and his group of boys’ school misfits in their quest to unravel a mystical mystery involving an ancient Welsh king. Mystery, heartbreak, friendship, betrayal, and moral dilemmas emerge in the first book only to intensify further as the series continues. Lush, descriptive prose; complex characters; and a multi-layered, imaginative plot create a leisurely-paced but riveting series that succeeds in seamlessly combining magic with contemporary social issues. High School.

This One Summer by Jillian Tamaki & Mariko Tamaki (2014)

Bittersweet and brilliantly paced, this coming-of-age graphic novel centers on a young teen’s summer vacation, during which she finds herself drawn to an older boy and depressed by the strain in her parents’ marriage. Mariko Tamaki’s illustrations wonderfully convey Rose’s frustrations, anxiety, and heartbreaks, and the images are full of life and movement. Middle School (mature)/High School.

Updated:
Giver Quartet (series) by Lois Lowry (1993–2012)
The Giver has been included on our list since the beginning, but now we feel it is time to round out the story of Jonas and the Community by including the full series. We’ve added Gathering Blue, Messenger, and Son to the list!
Source: Book News and Reviews