As a reminder, library hours are: Monday–Thursday 11 AM–7 PM @Nichols, 9 AM–8 PM @All Other Locations | Friday & Saturday 9 AM–5 PM @All Locations | Sunday 1–5 PM @Ridgway Memorial Only
Skip to content
Home » NEWS: 2013 Youth Media Awards—Tracy Weighs In
Share this...

… Cause what ya’ll really want to know is what I think, right? Hey, humor me here.

So, the Newberys, Caldecotts, Printz Awards, and other key ALA book awards were announced yesterday, and I was rather proud of myself for having read so many of the honorees. Here’s how things played out (with a little commentary from me :)).

Newbery Honor: Splendors and Glooms by Laura Amy Schlitz
Not long after I started reading this book, I found myself thinking This is a book that will win awards. I also thought that it was a book that might have more appeal for adults than kids, one of those books that adults really, really want kids to love, but which turn out to be right only for that small, perfect audience. Who will love it with a passion. It’s undeniably well written, but I couldn’t bring myself to get excited about it although I enjoyed it and admired it in a impersonal kind of way. But if you (or your child) always wished Oliver Twist had a bit of dark fantasy mixed in, this may be just the book for you. (Okay, that sounds really intriguing. Maybe I should give this one another go…)

Newbery Honor: Bomb: The Race to Build—and Steal—the World’s Most Dangerous Weapon by Steve Sheinkin
In my mind, this one was pretty much a shoe-in for a nod. I’m not a huge reader of juvenile nonfiction, but the storytelling here was compelling and informative. Thumbs up. Bomb was also the winner of the Robert F. Sibert Informational Book Award and of the YALSA Award for Excellence in Nonfiction for Young Adults.

Newbery Honor: Three Times Lucky by Sheila Turnage
I was so excited—and the teeniest bit surprised—to see this one get an honor nod. While there is no magic in this book in the supernatural sense, it is magical nonetheless. Turnage’s storytelling—the sense of place, character, voice, and tone—here is fantastic, and Mo is an unforgettable heroine if there ever was one.

**What’s Missing: Wonder by R.J. Palacio
I adored Wonder and firmly believe it should be required reading for every upper elementary or middle school student. And then their parents and older siblings need to read it too. 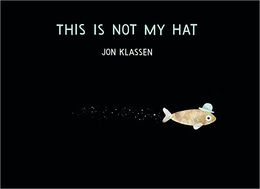 Medal Winner: This Is Not My Hat, illustrated and written by Jon Klassen
Personally, I thought Klassen was cheated out of a Caldecott last year for I Want My Hat Back. He’s a genius when it comes to providing subtle visual cues to punctuate the sly humor that makes both of his “hat” book shine.

Caldecott Honor: Creepy Carrots!, illustrated by Peter Brown and written by Arron Reynolds
This was one of my absolute favorite picture books of 2012, and I am pleasantly surprised to see it get a nod here. I loved the cinematic feel (one review I read likened it to a Hitchcock horror movie—for kids of course), and the palette of orange, black, and gray. A fascinating combo of kiddie horror and humor. Well done, Caldecott committee.

Caldecott Honor: Extra Yarn, illustrated by Jon Klassen and written by Mac Barnett
So they’re really making up for overlooking Klassen last year. Although the text/story of Extra Yarn didn’t completely do it for me, I loved Klassen’s artwork—which is what counts for the purpose of this award.

Caldecott Honor: Green, illustrated and written by Laura Vaccaro Seeger
This is the book I expected to win, though I am quite pleased with the final outcome. Seeger’s work here is innovative, and the wonder of Green is made abundantly clear in this book trailer.

Caldecott Honor: One Cool Friend, illustrated by David Small and written by Tony Buzzeo
I liked it, but didn’t love it, which is why it didn’t make the cut for our list of the Best Children’s Picture Books of 2012. But, as with Extra Yarn, I quite liked the illustrations. So I’m totally “cool” with this one too.

Caldecott Honor: Sleep Like A Tiger, illustrated by Pamela Zagaresnski and written by Mary Logue
Once again, I liked the book and the illustrations but it didn’t really make a strong impression on me one way or the other.

**What’s Missing: Oh, No!, illustrated by Eric Rohmann and written by Candace Fleming and Nighttime Ninja by illustrated by Ed Young and written by Barbara DaCosta, both of which I expected to make the list. And—while I always saw it as a long shot—I really, really love Ashley Wolff’s artwork in Baby Bear Sees Blue. I also think illustrator Doug Santat did some phenomenal work this year. But then, everybody can’t win 🙂

Coretta Scott King (Author) Book Award
(Aka, the category that totally breaks my streak of having read the material…)

Medal Winner: Hand in Hand: Ten Black Men Who Changed America by Andrea Davis Pinkney, illustrated by Brian Pinkney
Okay, not only does this one break my reading streak—I hadn’t even heard of this book yet. But then I already admitted that I’m not much of a juvenile nonfiction reader…

King (Author) Honor: Each Kindness by Jacqueline Woodson, illustrated by E.B. Lewis
A gentle yet powerful picture book about bullying from the side of the (belatedly regretful) bully, and one of our picks for Best Children’s Picture Books of 2012

King (Author) Honor: No Crystal Stair: A Documentary Novel of the Life and Work of Lewis Michaux, Harlem Bookseller by  Vaunda Micheaux Nelson, illustrated by R. Gregory Christie
I’ve heard fabulous things about this one, and it is currently sitting at home waiting for me to find time to read it.

King (Illustrator) Medal: I, Too, Am America, illustrated by Bryan Collier and written by Langston Hughes
I read it and loved the art. Unfortunately, the Langston Hughes text didn’t quite resonate for me (I know; awful, right?). As a result, the book wasn’t very memorable for me. But I may have to take anthor look.

King (Illustrator) Honor: H.O.R.S.E., illustrated and written by Christopher Myers
I am not familiar with this title 🙁 .

King (Illustrator) Honor: Ellen’s Broom., illustrated by Daniel minter and written by Kelly Starling Lyons
Don’t know this one either.

Michael L. Printz Award
As a side note, I must say: There was LOTS of debate yesterday and into today on librarian listservs and blogs about the recent winners of this category, some stating that the winners are often too literary to appeal to teen readers or that engaging stories are overlooked in favor of technical writing or literary experimentation. As this is an award for literary excellence, I would say the winners should be extremely well written. But in my view, literary merit depends upon that magical element of good storytelling as well as good technical writing. I’m not going to comment on how these specific qualities do or don’t apply to the specific winners and honorees (past or present) because here’s the thing: judging books—anything really—is SUBJECTIVE. Rant over.

Medal Winner: In Darkness by Nick Lake
I haven’t read this one yet and have read mixed reviews, but can’t wait to read for myself.

Printz Honor: Aristotle and Dante Discover the Secrets of the Universe by Benjamin Alire Sáenz
Just finished this last weekend and immediately it became my Printz sleeper favorite. It’s compulsively readable plus incredibly well written (but not in a showy or gimmicky way). I couldn’t be happier that Sáenz also nabbed the Pura Belpré (Author) Award and the Stonewall Book Award. I really have to read his highly praised book Last Night I Sang to the Monster ASAP.

Printz Honor: Code Name Verity by Elizabeth Wein
I know people who absolutely LOVED this book and others who found it so confusing they couldn’t finish it. Based on early buzz, I thought for sure it was going to be selected as the medal winner. It’s still sitting at home in my (rather tall and wobbly) to-be-read pile.

Printz Honor: Dodger by Terry Pratchett
Haven’t read this one, and haven’t heard too much buzz up till now. But you can never count out Terry Pratchett, and I will get to this one someday…

Printz Honor: The White Bicycle by Beverly Brenna
This one was a surprise to many; at least many of the commenters to my various listservs hadn’t yet heard of it. But then, that’s what I love about book awards: the chance to discover wonderful books that might’ve been otherwise overlooked.

**What’s Missing: Lots of people are up in arms over the exclusion of John Green’s A Fault in Their Stars, which I adored and agree to be incredibly well written. At the same time, I didn’t think it was a perfect book and am not overly disappointed. Maybe I’m just too happy about Aristotle and Dante Discover the Secrets of the Universe.  And A Fault in Our Stars wasn’t completely left out as it garnered the Odyssey Award for the audiobook.

Other ALA Award winners announced yesterday include:

Seraphina by Rachel Hartman,  William C. Morris Award winner
I found this to be an excellent debut novel featuring a well-developed fantasy world and an intriguing take on dragons. I can’t wait for the sequel.

The Miseducation of Cameron Post by emily m. danforth, William C. Morris Award finalist
I found this book quite engaging, but for me it begins to drag a bit in the middle. I actually had to set it aside for a while. That being said, even though I wasn’t reading it for a while, the writing and characters stayed in the back of my mind. I completely understand why the book has been compared to The Catcher in the Rye, although Cameron is a gay girl in 1980s small-town America and the book actually takes place across several years (as opposed to a few days). That being said, I was surprised that it wasn’t a Stonewall Honor Book

For a complete list of awards, winners, and honorees (if you’re not sick of awards lists by now), you can read yesterday’s ALA Press Release.