Our Teen Read Week celebration continues as promised! We called a wrap on our 2015 Ultimate Teen Booklist Committee today, and now it’s time to share our latest additions and updates. This year’s committee added a number of new and previously overlooked titles, so I’ve decided to post them here in two parts, with Part 2 to come later this week.

Afterworlds by Scott Westerfeld (2014)
This unique novel of two stories told in alternating chapters will especially appeal to perceptive readers interested in the myriad ways authors’ lives influence their work. In the “real” world,  eighteen-year-old Darcy Patel is struggling to build a life as a writer in New York City and falling in love for the first time. Meanwhile, Lizzie—the fictional protagonist of Darcy’s novel—has survived a terrorist attack by posing as a ghost and slipping into a nebulous Afterworld. Realistic fiction meets fantasy meets romance meets thriller in this surprisingly cohesive tale as Darcy navigates the ins and outs of the publishing world and Lizzie comes into new powers and connects with a hunky spirit guide in the ghost world. High School.

Airborn by Kenneth Oppel (2004)
In this high-octane steampunk adventure, a young cabin boy aboard an airship and a wealthy young girl traveling with her chaperone team up to prove the existence of mysterious winged creatures that reportedly live hundreds of feet above the Earth’s surface. Featuring daring rescues, brave acrobatics, and even pirates, the plot of this novel centers on adventure over romance—though there is a little of that too! Middle School/High School.

Anansi Boys by Neil Gaiman (2005)
This inventive, darkly humorous fantasy centers on Fat Charlie Nancy, a young twenty-something who is haunted by his father’s annoying taunts and embarrassing death. But following Mr. Nancy’s death, Charlie learns that his father was really the African trickster god in human form and that he has a brother—Spider—with otherworldly powers. Before he knows it, Charlie finds himself surrounded by the chaos his brother creates and immersed in a surreal, mythological journey. High School.

Black Butler (manga series) by Yana Toboso (2006–Ongoing)
In Victorian-era London, an orphaned young earl named Ciel and his faithful servant bide their time until they can track down the mysterious organization responsible for his parents’ murders and Ciel’s subsequent kidnapping and torture. To outsiders, Earl Phantomhive’s loyal servant seems extremely capable but otherwise unremarkable. In truth, Sebastian is actually a demon contracted to help the young earl avenge his parents’ deaths. To date, there are 20 volumes in the series. High School (mature). 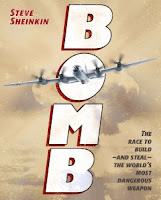 Bomb: The Race to Build—and Steal—the World’s Most Dangerous Weapon by Steve Sheinkin (2012)
History and science converge in this engrossing tale of the real-life espionage and secret military operations taking place as scientists secretly worked to split the atom and create the first atomic bomb. Middle School/High School.

A Brief Chapter in My Impossible Life by Dana Reinhardt (2006)
Sixteen-year-old Simone has always been perfectly happy with her adoptive family and never really wondered about her birth parents. But when she is asked to meet her birth mother, a Hasidic Jew who is dying of cancer, Simone’s once simple life is suddenly full of complex questions about life, love, family, and her belief in a God she never thought existed. High School.

The Complete Maus by Art Spiegelman (1997)
Winner of the Pulitzer Prize, this visually and emotionally rich tale of the Holocaust reimagines the author’s parents’ deportation to Auschwitz and their post-war experiences in America in a world where the Nazis are represented as cats and Jews are symbolically portrayed as mice. Includes My Father Bleeds History (1986) and And Here My Troubles Begin (1991). Middle School (mature)/High School.

The DUFF by Kody Keplinger (2011)
Bianca loathes Wesley Rush and his playboy ways. But while coping with the return of the boy who broke her heart and her parents’ crumbling marriage, Bianca is desperate for a distraction… So she kisses Wesley. It’s stupid and she hates herself, but they start hooking up secretly. The plan is to keep everything on a strictly physical level, but then the impossible happens: she actually starts to like Wesley and is horrified to discover that she could actually be falling for the guy she hated more than anyone. This edgy novel is nothing like the watered-down movie adaptation, so if you expect an ugly-duckling makeover story, think again. The DUFF is a sexy, sharply funny novel that examines teen self-esteem and the social labeling of others all in the compelling package of a modern love story and family drama. High School (mature). Read my review from September 2011!

Fahrenheit 451 by Ray Bradbury (1953)
In this dystopian classic set in a totalitarion society, a “fireman” who burns books for a living begins to question his beliefs and dares to defy the rule that all books must be destroyed. Middle School (mature)/High School.

The Great Gatsby by F. Scott Fitzgerald (1925)
It may be an assigned-reading staple, but there’s a reason this Jazz-age tale of thwarted love, greed, and revenge in a wealthy seaside community has become a classic. High School.

His Fair Assassin Trilogy (series) by Robin LaFevers (2012–2014)
In fifteenth century Brittany, three young women seeking refuge at the convent of St. Mortain are blessed by Death with dangerous gifts and trained as assassins. As each leaves the convent—whether on a mission for Death or for her own purposes—she must navigate a dangerous web of intrigue and deceit to decide what her path will be. High School.

A Hole in My Life by Jack Gantos (2002)
In the summer of 1971, Jack Gantos was an aspiring writer on the hunt for adventure and college tuition money. A few wrong turns later, he’s smuggling drugs and doing time in prison. Darkly funny, insightful, and unflinchingly honest, A Hole in My Life is the true account of the uneven path one of today’s most celebrated authors for children and teens took to reach his dream. High School.

House of the Scorpion by Nancy Farmer (2002)
In a future no-man’s land situated between the United States and what was once Mexico, a powerful drug lord known as El Patrón rules ruthlessly. Young Matteo has grown up isolated, but when he is brought to live on the estate of El Patrón, Matt quickly grows to idolize the man he thinks of as a father figure. However, as he grows older and wiser, Matteo begins to see that El Patrón’s protectiveness has a selfish motive and Matt is viewed as nothing more than a commodity meant to keep El Patrón alive. Middle School/High School.

I Am Malala: The Girl Who Stood Up for Education and Was Shot by the Taliban by Malala Yousafzai and Christina Lamb (2013)
The Taliban tried to silence 14-year-old Pakistani student Malala Yousafazi, but she refused to be give up her demand for an education. In the process, she survived an assassination attempt, became a global inspiration, and became the youngest nominee ever for the Nobel Peace Prize. Middle School (mature)/High School.

I’ll Give You the Sun by Jandy Nelson (2014)
Stunning and full of passages readers will want to revisit again and again, I’ll Give You the Sun is the story of fraternal twins Noah and Jude. Three years ago, Noah and Jude were so connected that they communicated without words. Now sixteen, they are practically strangers—to each other and even to themselves. Their closeness has been shattered by secrets and lies and tragedy, but perhaps there is a chance to regain what was lost if first each can face what went wrong before. The novel is narrated jointly between the two siblings, weaving in an out of time seamlessly, Noah in the past and Jude in the present. This is an unforgettable novel, kooky and heartbreaking, full of art and love and even a ghost or two. High School.

Divergent Trilogy by Veronica Roth
Insurgent and Allegiant were added to the first installment. For now, we’re sticking to the core trilogy, but what do you think… Does Four belong on the list next year?

Joining me on the committee this year were representatives of several BCPL departments. Thanks for participating, ladies!

So what do you think of our additions, and what titles do you hope to see on Part 2 of our 2015 updates? What are your favorite titles from this year that we should consider for the next update?
Source: Book News and Reviews